Fanfiction > Real Person: Actors/Actresses
Robert Pattison [0]
Stories
Untitled by Jannika Rated: G [ - ]
Summary: Backstreet Boys are staring their This Is Us tour and it's hard to Nick staying focus. 3 weeks before Tour, Nick meets his teen crush Kelly (Callie) after 12 years and finds her locked inside his basement with her ex-husband Robert. No one knows why they end up to his basement. Maybe it was Robert's fault...
In London, Nick gets to know a girl that puts his mind crazy. He can't stop thinking about her at night.


[Report This]
Published: 02/05/19 » Updated: 08/09/20
Back To Love by PrincessErica Rated: R [ - ]
Summary: Genna Rizzo fell in love with a spikey haired DJ named DJ Pauly D. They were in love until news broke he fathered a baby with another woman. Her heart is broken but moves on and gets engaged to the blonde Backstreet Boy. Everything is great until DJ Pauly D is set to open up for the Backstreet Boys tour. What happens? Who will she choose? Who does Genna really love?
Categories: Fanfiction > Backstreet Boys, Fanfiction > Real Person: Actors/Actresses
Characters: None
Genres: Romance
Warnings: Graphic Sexual Content
Series: None
Chapters: 10 Table of Contents
Completed: No
Word count: 5270
Read Count: 9909

Darien Carter, newly divorced from Nick Carter, needs to find her talented daughter a dance instructor.  She meets Kenny Wormald, of Footloose fame, and is instantly drawn to him.  He offers her a job and a second chance at a life she gave up long ago.

The 10 celebrites that were killed by a cold blooded killer, comes back from their watery graves and seeks out revenge on their killer.....and to help protect another group of teenage celebrites who is also in danger of being killed by...as they think....by the same killer....

Annelise is a quiet college student. She is selected to audition for a movie one day when the casting director stops her on her way to work. She lands the lead role opposite none other than Jackson Rathbone.

They begin to run lines and take little excursions with one another and soon notice that a specific girl seems to always be around.

Then the notes start. Anne brushes them off at first because she only gets one and isn't too worried about it because it appears to be from a Twilight-crazed fangirl. But then Jackson starts getting the notes too.

The fact that the notes have no postage, which means they are hand delivered, is what scares both Anne and Jackson into taking them seriously.

But what happens whenfangirls go too far?

His life was over before he knew it and now his widow is out seeking revenge on the ones that took his life away. A successful small time lawyer from Alabama is pulled into one of the most riskiest cases ever that could endanger his client's life more than she knows.

Ten teenage celebrities get stalked by a psycho killer......

*REVISION IN THE WORKS*


[Report This]
Published: 04/24/08 » Updated: 05/10/08
Rain of Blood by Sinara Rated: PG-13 [ - ]
Summary: Blaine Christianson is tired of running. She’s tired of hiding and fighting for her life. She’s tired of living in the past. She seems like your ordinary girl, until you get to know her. Blaine is actually half-vampire, and like all halfies, she was born with special gifts. But when she joins the tour with the Backstreet Boys, she finds out that her destiny holds more in store for her than she ever could have imagined. And just when she thought her ex was out of her life, he comes back with a vengeance. What does her destiny hold? What do the Backstreet Boys have to do with her past… but more importantly, her future? Will she survive the ultimate test of her power? Only time will tell.
Categories: Fanfiction > Backstreet Boys, Fanfiction > Real Person: Actors/Actresses
Characters: AJ, Brian, Group
Genres: Action, Fantasy, Romance, Science Fiction, Supernatural
Warnings: Death, Sexual Content, Violence
Series: None
Chapters: 6 Table of Contents
Completed: No
Word count: 12736
Read Count: 6397


[Report This]
Published: 01/08/08 » Updated: 01/08/08
Welcome to wherever you are by FallenAngel Rated: PG [ - ]
Summary: Hey everyone, this is written by me and my sister, but she doesn't have any stories on here, its a combination story ..... Join Tracy and Misha on thier life journey, they experience Friendship, love and the ulitimate betrayal, but can they all make it through and still stay best friends ..... read to find out!
Categories: Fanfiction > Music > Aaron Carter, Fanfiction > Backstreet Boys, Fanfiction > Music > NSYNC, Fanfiction > Real Person: Actors/Actresses
Characters: Group, Group, Other, Other
Genres: Adventure, Drama, Humor, Romance
Warnings: None
Series: None
Chapters: 4 Table of Contents
Completed: No
Word count: 14787
Read Count: 3939

[ - ]
Summary: Tracy and Misha grew up in Florida, but after a fight they unexpectedly dissapear, what happens when years later they come back, will everyone be happy to see them and will they all become the best of friends again
Categories: Fanfiction > Backstreet Boys, Fanfiction > Music > NSYNC, Fanfiction > Real Person: Actors/Actresses, Fanfiction > Music > Westlife
Characters: AJ, Brian, Group, Howie, Kevin, Nick, Other, Chris, Group, JC, Joey, Justin, Lance, Other, Bryan, Group, Kian, Mark, Nicky, Other, Shane
Genres: Drama, Humor, Romance
Warnings: None
Series: None
Chapters: 1 Table of Contents
Completed: No
Word count: 3779
Read Count: 715 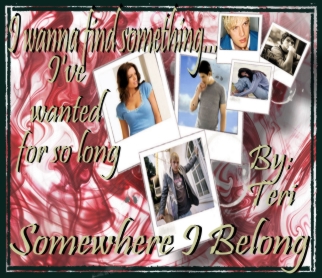 All Alyssa wants is a chance to prove she can take care of herself to find her own place in the world as a self-sufficient adult. That she doesn't need Nick to provide for her, that she can make it on her own, on her own terms. Can he give her what she needs and still find a way to mend the wounds that hurtful words had caused them both? What happens when a handsome and kind, man, Brandon Routh, walks into Alyssa's life and catches her attention. Will she stay loyal to the one who holds her heart, or will she turn to Brandon for comfort?
Categories: Fanfiction > Music > Aaron Carter, Fanfiction > Backstreet Boys, Fanfiction > Real Person: Actors/Actresses
Characters: None
Genres: Angst, Drama, Humor, Romance
Warnings: Graphic Sexual Content
Series: Nothing's Impossible: A Series
Chapters: 30 Table of Contents
Completed: Yes
Word count: 104520
Read Count: 52789

[ - ]
Summary: Zac is dating Rachel. Rachel is Kalina's sister who's jealous of the best friend relationship Zac and Kali share. Kalina is secretly in love with Zac. What she doesn't know is that Zac is also in love with her, and that Rachel is just his way of trying to be with someone somewhat similar to her, without possibly ruining their friendship.
Categories: Fanfiction > Real Person: Actors/Actresses
Characters: None
Genres: Angst, Drama, Romance
Warnings: None
Series: The Perfect One
Chapters: 6 Table of Contents
Completed: Yes
Word count: 5850
Read Count: 5898

[ - ]
Summary: Clair is adopted, join her journey through life with ups, downs, laughter and tears, as tradegy strikes when you think everything will be okay. Got a few scenes with Nsync, and other celebrities will feature every now and then.
Categories: Fanfiction > Backstreet Boys, Fanfiction > Music > NSYNC, Fanfiction > Music > Aaron Carter, Fanfiction > Real Person: Actors/Actresses
Characters: Group, Group, Other
Genres: Drama, Humor, Romance
Warnings: None
Series: None
Chapters: 2 Table of Contents
Completed: No
Word count: 3137
Read Count: 1616