Other
Stories
Heart Without A Home by emeraldbecca1991 Rated: R [ - ]
Summary: Elisa Montgomery's concert experience resulted in something shocking, a friendship with the youngest Backstreet Boy, Nick. Can Nick love her past her pain?

In the height of the Black & Blue tour, AJ McLean finds himself in danger of his first relapse since rehab. As he looses grip with his recovery, his girlfriend, Catie, is challenged with the decision to stand by his side or leave him forever.
Categories: Fanfiction > Backstreet Boys
Characters: AJ, Brian, Group, Howie, Kevin, Nick, Other
Genres: Angst, Drama
Warnings: Domestic Violence, Graphic Sexual Content, Graphic Violence, Sexual Content, Violence
Series: None
Chapters: 3 Table of Contents
Completed: No
Word count: 7137
Read Count: 445 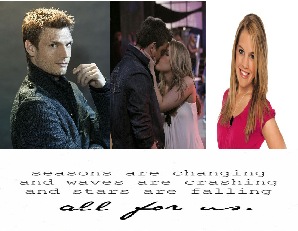 Nick Carter hadn't seen his best friend, Starr Morasco in over a year. When she enrolls at the same collage he's at, he can tell something is very wrong. Will he be able to help her?

Wedding bells are practically ringing and Nick's best man is... well, man's best friend. Nacho's got his tuxedo fitted and he's ready for his close-up on the VH1 wedding special Nick and Lauren are filming. But then one week before the wedding, disaster strikes. Can Nacho get in touch with his doggie-side or is Nick's wedding's gonna be ruined by a crazy producer with the hots for Lauren...? Find out in Nacho's Big Adventure.

Welcome to Music City, where everyone goes to move on...

[Report This]
Published: 06/24/13 » Updated: 09/10/13
If We Could Only Make Believe by CarterFan28 Rated: G [ - ]
Summary: Rose has always been a huge Backstreet fan and her biggest dream was to meet them one day. Working at a recording studio gave her the best chance at meeting them without paying for VIP tickets. One day she writes a song exposing the make believe world she wishes was a reality and she comes face to face with the biggest surprise of her life.
Categories: Fanfiction > Backstreet Boys
Characters: Group, Other
Genres: None
Warnings: None
Series: None
Chapters: 1 Table of Contents
Completed: Yes
Word count: 3062
Read Count: 424

Wow, a lot has happened to Kalie and Heather. Kalie went through so many ups and downs while being Nick Carter’s best friend since childhood and finally becoming his fiancé. Heather went through one wicked dream! And then when they finally meet, they get locked out in a hurricane by complete nut jobs and unbelievably run full speed into each other and switch bodies. Now the girls are getting out of the hospital after that horrifying night and Kalie and Nick have to start wedding plans and Heather and Rich go on with their life together. But that would be a plain, boring fan fiction now would it? So of course there will be twists and turns along the way but I’ve said too much already. Enjoy the next story in the saga of Kalie and Heather; here’s The Perfect Song: The Day Has Finally Come!

This is the follow up to Behind the Mask and Two Is Better Than One.

The Backstreet Boys are having a concert in New York City but Hurricane Irene is threatening to be a horrible storm but nobody believes it. Heather and her Backstreet Buds head into the city and the Backstreet Boys and their tour cast and crew, including Kalie, make their way up to New York as well. The storm worsens when everyone arrives in the city and once the power goes out something happens to make Kalie and Heather feel like they’re in Freaky Friday.

Nick’s obsessed with Cora, a pop star of legendary proportions that’s taken over the industry. The problem? She’s kinda married. But Nick’s determination to win the girl drives him to hire an amateur private investigator, a woman named Samantha who poses as his personal assistant, to try to give Cora a reason to leave. But what happens when Samantha falls for Nick instead?

Heather was just an ordinary girl who stood out in the crowd. Nick was the Backstreet Boy who noticed her and wanted to get to know her better. Rich was her best friend who vanished from her life and unexpectedly reappeared. Now both Nick and Rich are fighting for Heather’s heart. Who will win? The best friend she thought she lost forever or the Backstreet Boy she was falling hard and fast for?

Green is a color that's thought to encourage emotional stability and calmness. Therefore it's believed to help with emotional issues, such as trust, compassion and the ability to cope with change.

Brians world is rattled when he learns his name is on the birth certificate of a young girl who was abused. Is Brian really her father? What will come of the young girl? Will either of them ever be ok?

Anna Parker a Canadian Backstreet Boys fan has won one of the biggest contests in BSB history…A chance to go on tour with the Backstreet Boys, not only that but to go with them on all their promo trips, and a chance to share a hotel room with each guy (It’d be like a rotation) throughout the tour and promos.  Join this young woman on the journey of a life time!

Five men from different walks of life are brought together when called up to fight in Europe during World War Two...